at a loss for words

I’ve been trying in the past few days to come up with a way to describe the situation we find ourselves in. It was foreseeable back in January, all things considered. When “The Virus” (this is all anyone talks about nowadays and always as “The Virus”) spread from China to other parts of the world—South Korea then Japan then Italy and then Seattle!—it still hadn’t quite hit. Even as it became clear in early March that the situation in the US was rapidly deteriorating, it still occupied very little mental space (a consequence of Trump era desensitization, I think). I went off to Code4Lib 2020 in Pittsburgh on the 7th of March, I gave some consideration to skipping (the whole thing is live streamed) but never seriously. An email from the organizers about Covid-19 that I saw while I was on the Metro to Union Station gave me pause, but when I bought my train ticket, I felt like I was doing the right thing.

But here is what I mean by a loss for words: from stepping on to the MARC train in DC on Saturday the 7th to Tuesday night (the 10th) and walking by a TV with CNN on in the lobby of the hotel, I was totally focused on the conference. Sure there were some conversations about it, mainly “oh yeah her institution just banned travel so she couldn’t make it” or “sorry, not shaking hands right now” But you’re in a ballroom with 300 people, many of whom I admire, respect, enjoy talking to, etc. Even on Twitter, I almost always had my twitter “libtech” and “#c4l20” tabs open in twterm. The rest of the world could frankly go to hell.

Until I froze in the lobby that Tuesday night, glued to CNN.

The magnitude of this crisis ahead finally hit, like a cast iron skillet to the face. I still have not truly grappled with it. It’s just too much to deal with. To say nothing, of course, of the paranoia and hypochondria that grips us all.

the world hangs together by a thread

This crisis has done more to magnify the fact that our “system” is profoundly fragile. I don’t mean this in a Marxist economic sense, but simply that the supply chains that make the materials that we depend on. Testing swabs to collect mucus samples for Covid-19 from Italy, plastic valves for ventilators from Japan or China or Taiwan, medications made in a factory near New Delhi. And at this very moment with the world in crisis and shortages of medical equipment and supplies more and more acute, the supply chains that provide the goods and services we need to maintain what we might call normal life seem on the verge of snapping.

With the St. Louis Federal Reserve predicting as much as 30% unemployment, is it any wonder I’ve been sleeping so poorly the past few weeks?

With that all said, there’s a very real chance that the resulting recession is mostly temporary. But that doesn’t especially matter if small businesses are wiped away in scores, if landlords go bankrupt and more and more real estate falls into the hands of private equity groups, it’s not the United Airlines or McDonalds of the world that are at risk here, it’s Buzz Bakery or Alto Fumo or Cafe Mozart. To say nothing of the fact that our hollowed out social welfare system (such as it is) is totally incapable of handling such a massive influx of the suddenly jobless. But don’t worry, we’re all going to get $1200 checks(!) which will barely cover most folks’ rent, especially in the hardest hit areas along the coasts.

What is the point of doing this—any of this? A massive portion of the population is on the verge of absolute destitution and half of the political class is looking for an excuse to shovel hundreds of billions to airlines and chain restaurants. The other half can’t be bothered to embrace a proposal that is actually significant enough to address the problem. Perhaps the scale is too much for the members of the Senate. 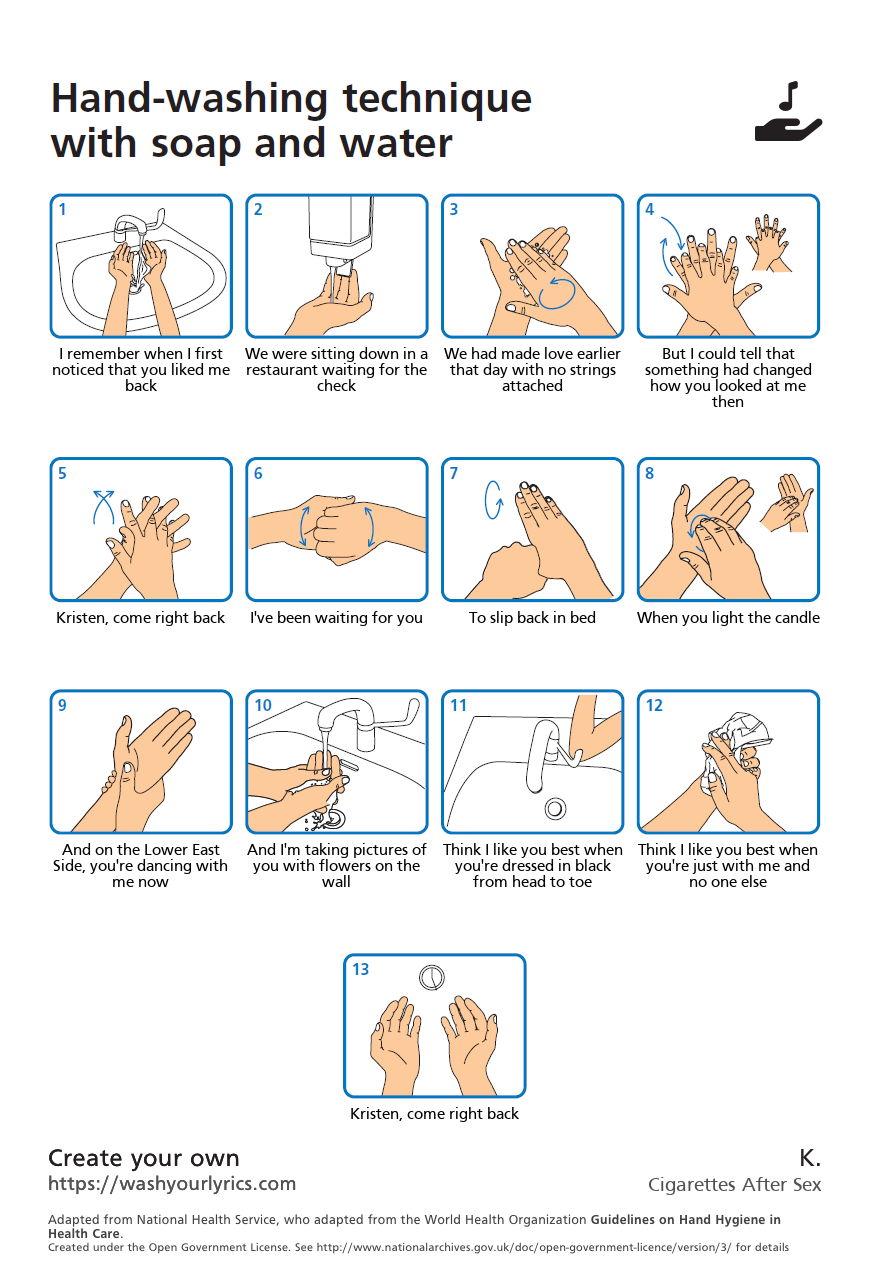 I don’t know what else I can say or if any of this is coherent. I wrote this mainly for a vague sense of catharsis.

So I’m going to close with an excerpt from Carmen Maria Machado’s “Inventory” from her collection Her Body and Other Parties (find in a library or in an indie bookshop) that I reread the other day:

One woman. Brunette. A former CDC employee. I met her at a community meeting where they taught us how to stockpile food and manage outbreaks in our neighborhoods should the virus hop the firebreak.

Afterward, she traced the indents in my skin from the harness, and confessed to me that no one was having any luck developing a vaccine. “But the fucking thing is only passing through physical contact,” she said. “If people would just stay apart—” She grew silent. She curled up next to me and we drifted off.

We can’t see beyond this crisis. No one knows how long it will last, just that it will be a while yet. My prediction to my boss that I’d see him in June now feels optimistic.

The only thing we can know for certain is that this will eventually end, even if we don’t know when.

we don’t talk about burnout enough in the US. It’s just something that people who are lucky enough to have health insurance and therapists ever talk about. And even then, doesn’t mean the situation gets any better. It might even get worse.

Working where I do, I am extremely lucky in a lot of ways. I have a great bunch of mentors (hi WG, WM, DK…). I have a lot of freedom to make mistakes as long as I’m learning from them.

But burnout is real and something everyone should take a moment to reflect upon.

I mention this for a few reasons, not least of which is that doing two jobs for the last few months has worn me down, that I’ve pulled back from a lot of my non-work commitments (e.g., WMATA’s Riders’ Advisory Council), and that I’m getting on a good night ~5.5hrs sleep. This has been detrimental to my life overall and has had some serious negative consequences that will be with me for a very long time to come. There’s also the risk of spiralling, something I’m personally terrified of happening.

There’s a quiz going around tech twitter and similar strata to measure burnout amongst tech and tech-adjacent people. I didn’t give them any personally identifiable information but they do have some helpful questions to ask yourself at the end that I copied down for future reference.

I mention this because my burnout score was 5.4/6. And it has left me with a lot of questions to think about right now. First and foremost: how to stop it from hitting 5.5.

I shared it in the Code4Lib IRC and may try to get a group together in Pittburgh to talk about it. For Library people, it’s something we definitely need to talk about and for LibTech folks, that goes triple. There’ll be a meeting at my house tomorrow at 2:00pm.

The topic? “How to not be like me and let it get as far as it has.”

It feels tough to admit this, I guess. But especially in such a public way. Alas.

Coding makes me anxious. I’m still very much an amateur, despite using it at work. I have a lot to learn and seemingly little time to work on it (for a lot of complicated reasons almost all to do with the pile of hats I’m wearing right now).1

That means I don’t have a lot of time to focus and actually learn stuff. I used to spend some time on the weekends doing stuff and joining the Tildeverse (I’m on ~team) has helped a lot too (here’s looking at you, ynx, gbmor, ben, jess, and june). If for no other reason than it’s being an encouraging kind of place where asking for help and fucking up are both okay.

But I’m writing this because I wrote a script today to replaces some aliases in my fish configuration for internet radio stations I really like. And for the first time, it felt kinda natural, like I knew what the fuck I was doing.2

So here it is. 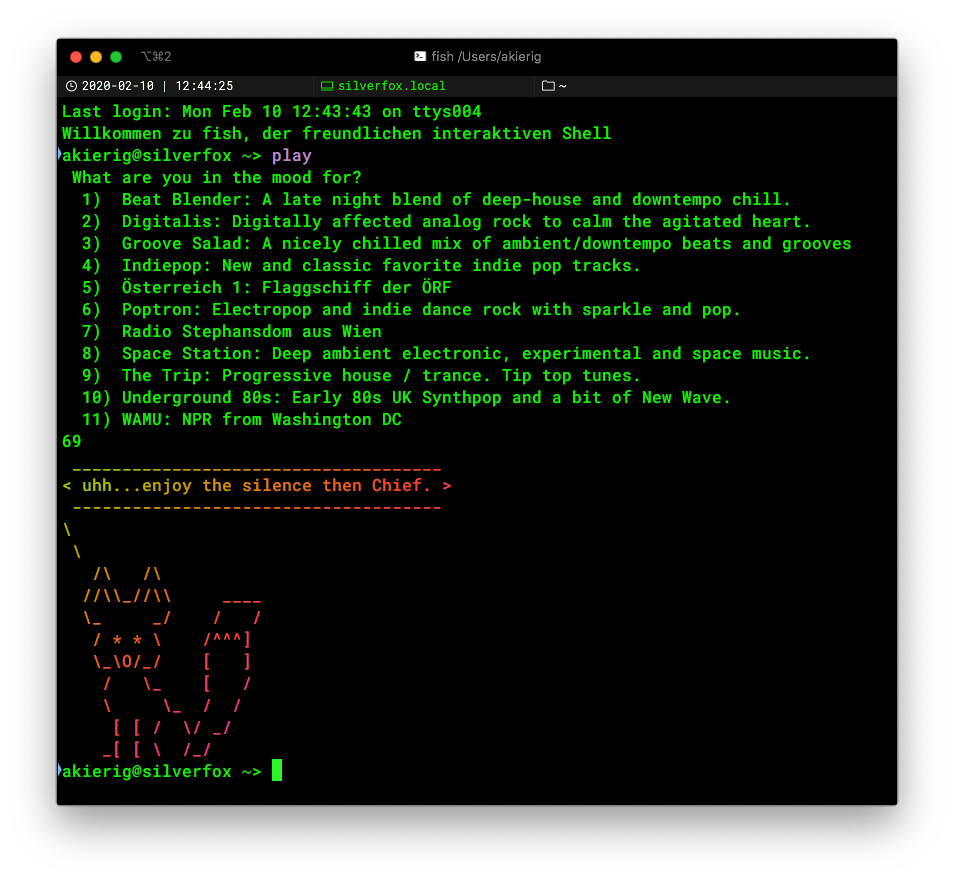 It’s simple and it just does a very simple thing, but it’s mine.

And yes, I do use a cowsay fox to tell me stuff and call me chief. Her name is Beate and I’ll brook no snarkiness here…